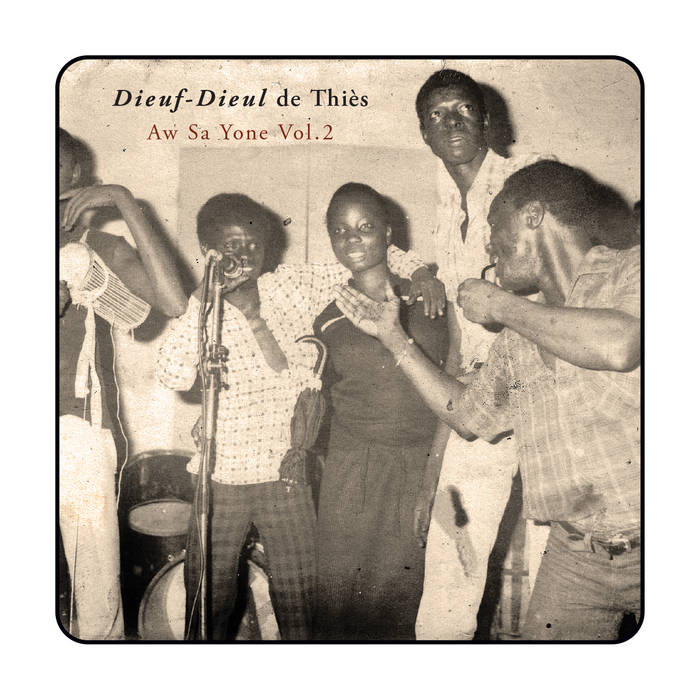 vladt My favorite Senegal band of 70s / 80s era. And I’ve listen much of them a lot! Returning to this release again and again. To listen it at night is a great pleasure. Highly recommended.

The Execrable Bede Four more of the remarkable live recordings made on the same night in 1982 as those on "Aw Sa Yone Vol.1" plus 2 more astounding live performances, recorded at the Sangomar Nightclub in Thiès, Senegal, in February 1981. Favorite track: Nianky.

Teranga Beat’s aim since the beginning of the label is to release lost and unreleased recordings of both famous groups and formerly unknown artists of West Africa. While going through several archives of the region, what thrilled me the most was the feeling of unexpected, especially when I stumbled upon a terrific recording from a totally unknown group. Discovering music that nobody has ever listened to before. I guess it has something to do with the psychology of the collector, always searching for that record nobody has.

My favourite discovery up to date is the Dieuf-Dieul de Thiès, a band that did not manage to release any of its recordings. I had previously heard their name in Thiès, but to my ears it sounded like an urban legend. People involved in music would rate it as the best group in the city, but nobody had ever seen a record from them, let alone a cassette. I thought it was one of these stories of gross exaggeration, so common in West Africa. However, when I fell upon their recordings and listened to them I realised it was all true.

In 2013 Teranga Beat released the first volume of Dieuf-Dieul's recordings. Today, on this vol. 2 album we proudly present the rest of their recorded tracks. On Vol.1 the tracks were well divided among three singers: Assane Camara with his unique style, an Afro-Manding hybrid, which he acquired through years of performing in the South region of Senegal, but also by virtue of being a Sosseh (that is, of Gambian origin) himself; the great Griot Gora Mbaye with his strong voice and deep wolof lyrics, displaying his strong links to the tradition of the country; and finally, the then young and talented Bassirou Sarr with his great singing skills.

Five out of seven overall tracks of Volume 2 feature Bassirou Sarr, a truly exceptional singer. Whether in a ballad or some explosive Mbalax, Bassirou's voice is always full of emotion. But if I had to pick out one song, that would definitely be "Raki". When Bassirou got the chance to finally listen to the song (30 years after its initial recording!), he told me the following story: one night, while performing singing "Raki" in Kolda, he noticed a man weeping right in front of the stage. Suddenly, the man turned to Bassirou and said: "Now listen here, you're not going nowhere! You're staying here and play this song all night long!".

One of the two remaining tunes, "Rumba Para Parejas", is a great latin cover sung by Assane Camara (Camou Yande). Although in his interview Bassirou admitted that Latin music was not their strong point, this track shows how good performers Dieuf-Dieul actually were. Besides, it is somehow ironic that, after the band broke up, all of its members gradually became Salsa musicians.

Having said all that, I am delighted to announce that Dieuf-Dieul are back together after 32 years, preparing for their first international tour! I sincerely hope this record will contribute to the international recognition Dieuf-Dieul fully deserve.

The Hammer and The Relentless from the Boston band Malleus stop by for a chat.